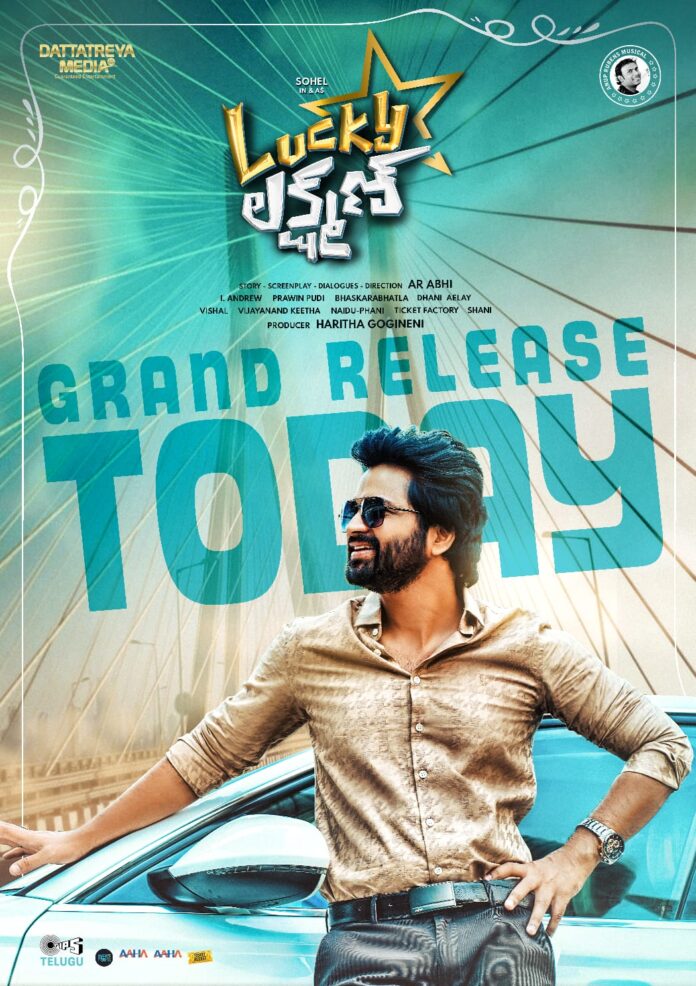 Big Boss fame Sohel is doing back-to-back films. His latest outing Lucky Lakshman is released on 30th December 2022. The film is a complete youthful entertainer with a pinch of family emotions. The film is all about a boy next door and his emotional success story.

Lakshman alias Lucky (Sohel) hates his father from his childhood. His father (Devi Prasad) ignores all his small wishes. While in college he falls in love with a rich girl Shreya (Moksha). Shreya supports Lucky in all times. After a few scenes, Another college student tries to seduce Lucky and she creates gap between Lucky and Shreya.

After completing college, Lucky starts a matrimony business and becomes successful. The Matrimony business brings changes in Lucky’s life. How Lucky wins shreya’s heart is the rest of the story.

Sohel is a complete actor. He is good in all the scenes. His comedy timing, dialogue delivery, his performance in emotional scenes, and everything is perfect. He delivered his role with ease. Moksha is beautiful and her acting skills are perfect. She will lure the youth audience with her glamour. Devi Prasad character is heavy and he will make you very emotional. Kadambari Kiran just did one scene but the scene will give a kick to the audience. All the actors delivered their roles as required.

First of all, the quality of the film is very rich. Producer Haritha Gogineni spent decent money while shooting. Anup Rubens’s music has taken this film to next level. songs were well choreographed and the background score will keep us in engaged with the film. dialogues are another highlight in the film. The emotional dialogues toward the climax will make the audience emotional. Cinematography by I. Andrew is crystal clear and Prawin Pudi’s editing is crisp and clear. The screenplay is perfect and the direction by AR Abhi is perfect. Though the story is not fresh, AR Abhi’s sensible screenplay, Anup Rubens’s music, and Sohel’s energetic performance make this film worth watching.

Lucky Lakshman is a youthful emotional family drama film. The film has all ingredients. Youth and family audiences will love the film. Go and Watch it.