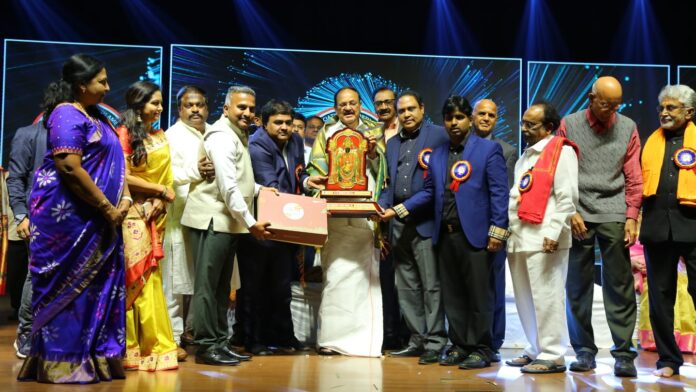 Telugu Association of North America or TANA is one of the largest NRI organizations in the US, catering specially to the Telugu states. Since its establishment in 1978, TANA has been working to preserve and spread the Telugu cultural heritage to ensure that the upcoming generations do not lose the connection to their roots. As a part of this mission, every year, TANA organizes special programs in the Telugu states across fields such as literature, dance, cinema and many more. One such event ‘TANA Kalaradhana” was held on December 16th at Shilpa Kala Vedika (Hyderabad). The program was held to honor the artists who have contributed significantly in the Telugu film industry. Actors Krishnaveni, Kota Srinivasa Rao, Murali Mohan, Giribabu, Singer Sushila, writer Paruchuri Gopalakrishna, director Kodandarami Reddy along with singer Sunitha, former MP Yarlagadla Lakshmiprasad and others participated in this program.

The ex Vice president of India Sri Muppavarapu Venkayya Naidu served as the program’s chief guest. He commended TANA’s efforts to promote Telugu culture among the younger generations.  He advised the audience to never forget their roots, especially their motherland and mother tongue as they were very important parts of cultural heritage.  Praising TANA’s initiatives such as Pathasala to teach young kids Telugu language, he stressed the need to learn the mother tongue, giving an example of former Supreme Court Chief Justice NV Ramana who completed his education in Telugu.

Writer Paruchuri Gopalakrishna appreciated TANA for coming to the Telugu states to organize such programs from the USA with love for the Telugu language and admiration for the Telugu people. Murali Mohan commended the efforts of NRIs who worked hard and moved to the US but are still attached to their heritage.

Many cultural programs were organized earlier as a part of the program to everyone’s delight. The event started with Ganesha Vandanam performed by a group of 80 children, disciples of Guru Ramachari. Dance performances by the students of Smt Ramadevi and Soundarya Kaushik enthralled the audience. Swati Atluri compered the program effectively and made it interesting.

The YouTube channel of the NRI newspaper  ‘Telugu Times’  serving Telugu NRIs in America for more than 20 years  was launched by the singer P.Sushila. The organizers also felicitated the event sponsor, Mr Suresh Reddy of the Skandhanshi group. Various TANA office bearers and leaders such as Anjaiah Chowdary Lavu, Ravi Potluri, Sunil Pantra and Sashikant Vallepalli also graced the event.