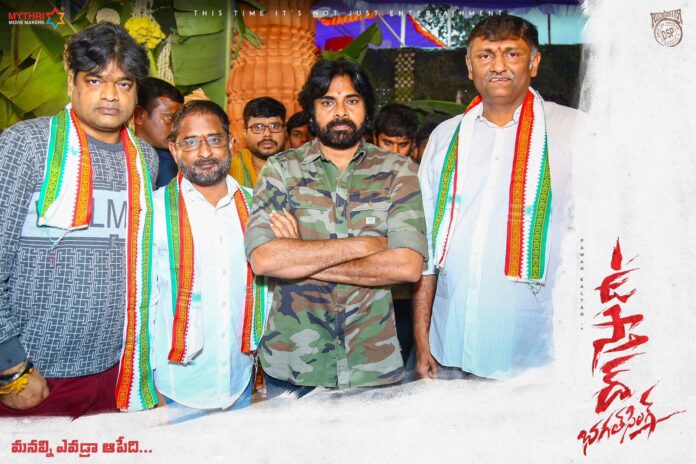 It’s official! There’s good news for fans of Pawan Kalyan, who have been waiting with bated breath to watch their beloved star join hands with blockbuster director Harish Shankar again. Yes, you heard it right! Ustaad Bhagat Singh, the latest project from the Gabbar Singh actor-director combo was formally launched today. The duo is as committed as ever to rewrite history again and break the records registered by Gabbar Singh.

While Dil Raju has sounded the clapboard, producers Ram Achanta, TG Vishwa Prasad, directors Gopichand Malineni, Buchi Babu formally handed over the script to the team. AM Ratnam had switched on the camera with VV Vinayak directing the first shot. Earlier this morning, a special poster featuring a casually flamboyant Pawan Kalyan, seated on a Harley Davidson bike, while sporting an off-white overcoat and holding a cup of tea, was unveiled by the makers.

In the backdrop of the poster, one could notice a windmill, a mobile tower and a thunder that symbolically signals the arrival of Pawan Kalyan a.k.a Ustaad Bhagat Singh. It also emphatically announces, ‘This time it’s not just entertainment’ with a Telugu caption that reads, ‘Manalni evadra aapedhi’ The film comprises a top-notch technical team, including cinematographer Ayananka Bose (who worked with Harish Shankar on Duvvada Jagannadham), noted art director Anand Sai (in his comeback film) and editor Chota K Prasad. Blockbuster music director behind hits like Pushpa and Rangasthalam, Devi Sri Prasad, is on board as the composer.

Stunt director duo Ram-Lakshman choreographs the action sequences. The film is set to go on floors soon. Other details regarding the cast, crew will be announced shortly. Mythri Movie Makers, a leading production house, has carved its niche in Telugu cinema in a few years since its inception and has backed some of the biggest projects in the industry featuring leading stars that created wonders at the box office and earned critical acclaim. This time too, they look set to continue their victorious run with an ambitious project to be made on an extravagant scale.