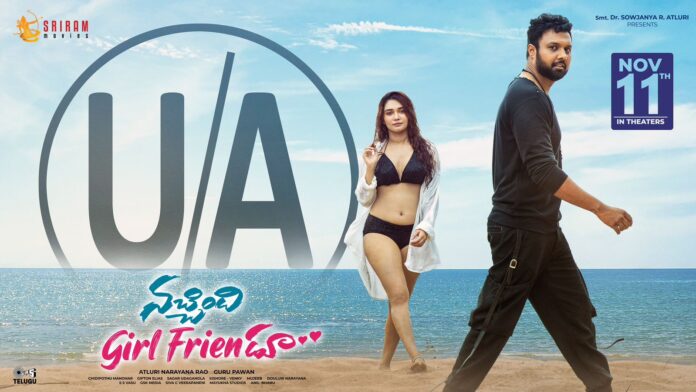 Nachindi Girl Friendu is a different love story film clubbed with a share market, If I Die app and a Killer. The film looks very fresh with Comedy punches, action episodes, Edge of seat scenes, and a Romantic love story. Hero Uday Shankar carries the whole film on his shoulders and Heroine Jennifer Emmanuel is hot and gorgeous. Senior actors Suman, Srikanth Iyyanger, Prudhvi Raj, and Madhu Nandhan played key roles. The film is directed by Guru Pawan and produced by Attluri Narayana Rao. The film was released on 11th November 2022.

The film kick starts with a Happy Birthday phone call. A friend will be calling Sandy (Jennifer Emmanuel) with Birthday wishes. Happy Sandy will be getting ready for her birthday celebrations but a mysterious SMS saying “Today everyone will die who speaks to you” will tinge on her celebrations. But Sandy ignores the SMS and will rush to the party. While on her day, Raja (Uday Shankar) will come across and fall in love with her at first sight. He along with his friend (Madhu Nandhan) will follow her. After a couple of scenes, Sandy also starts liking Raja. But the twist in the tale comes when Sandy introduces a stranger as her boyfriend. Who is that boyfriend, Why does Sandy bluffs Raja, Who is the Killer, and what is the back story is the rest of the film.
Uday Shankar is a talented actor. He is good in fights, comedy punches, romantic scenes, and dialogue delivery and he is energetic. He carried the whole film on his shoulders. Jennifer Emmanuel is Hot and gorgeous. She will lure the youth audience for sure. Her performance is up to the mark and she delivered her role with ease. Srikanth Iyengar and Suman delivered their roles perfectly. Madhu Nandhan and 30 Years Industry prudhvi will tickle funny bones. Others did as required.
The background score is the biggest highlight of the film. The Songs are good and well captured but the background score has given life to the film. The music is very trendy and it looks like we are watching an international film on the big screen. Music composer Gifton Elias composed music for this film. The cinematography by Saira Manohar is beautiful. Every frame looks rich and crystal clear. The Love story has a heart and the mainstream story is very fresh to Telugu audiences. The screenplay will keep the audience in engage.
Uday Shankar performance, Jennifer Emmanuel’s Glamour, Share Market and If I Die Point, Music, and Madhu Nandhan Comedy were the biggest highlights of the film.
Director Guru Pawan captured a fresh story with the regular screenplay. Though the film’s first half looks normal, Second Half will entertain you with full marks. Director Guru Pawan has fine-tuned the film with little details and made an entertaining film. It’s a Youthfull entertainer film and It’s a must-watch film for today’s youth.
Nachindi Girl Friendu is a youthful entertainer with hilarious comedy punches and a Romantic love story. Go and Watch it.
Rating : 3 Out of 5

Swathimuthyam is a wholesome family entertainer – Review – 3.25 Out of 5