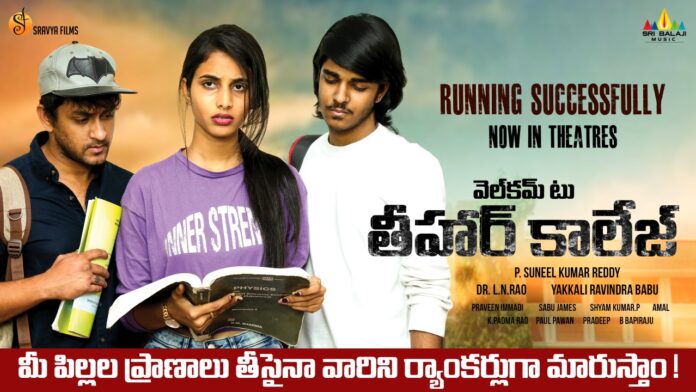 Welcome to Tihar college is a satirical take on present day education and health industries. The film discusses flaws in both the fields in an entertaining way.
Directed by award winning filmmaker Suneel Kumar Reddy is known for his socially relevant films. Unlike his previous films which dealt with the romantic flirtations and their reasons for criminal inclinations amongst youngsters, he has chosen a clean path to deal with the suffocation and depression in the intermediate colleges run by Corporate companies.

The film questions the relevance of present day education which is getting obsessive for ranks and marks.

Plot:
A tribal boy from agency comes to a corporate college to become a doctor. He gets confused with the teaching methodology, he insists to understand the concepts and fundamentals. Management gets impatient with his attitude. His rebel nature wins him good friends, but he also falls victim to the system. He then realizes the fallacy and raises his voice. Surprisingly despite being a campus film makers chose not to dwell into their physical attractions and romance and strictly focused on the core issues.

Artists and Technical values:
Manoj Nandan who acted as the main lead carried the film well with his experience. Chakri despite being a newcomer entertained audience thoroughly. Raman who played the chemistry lecturer evoked enough laughter. Maneesha and Mounika played their characters pretty well. Others played their part as per their characters.

Camera work is decent, and editing is adequate. Songs are a plus point to the film. Background score could have been better. Production values are average. Producers should be appreciated for their conviction.

Verdict:
A decent youth oriented clean film in the budget category. Word of mouth can help the film to succeed.

Swathimuthyam is a wholesome family entertainer – Review – 3.25 Out of 5