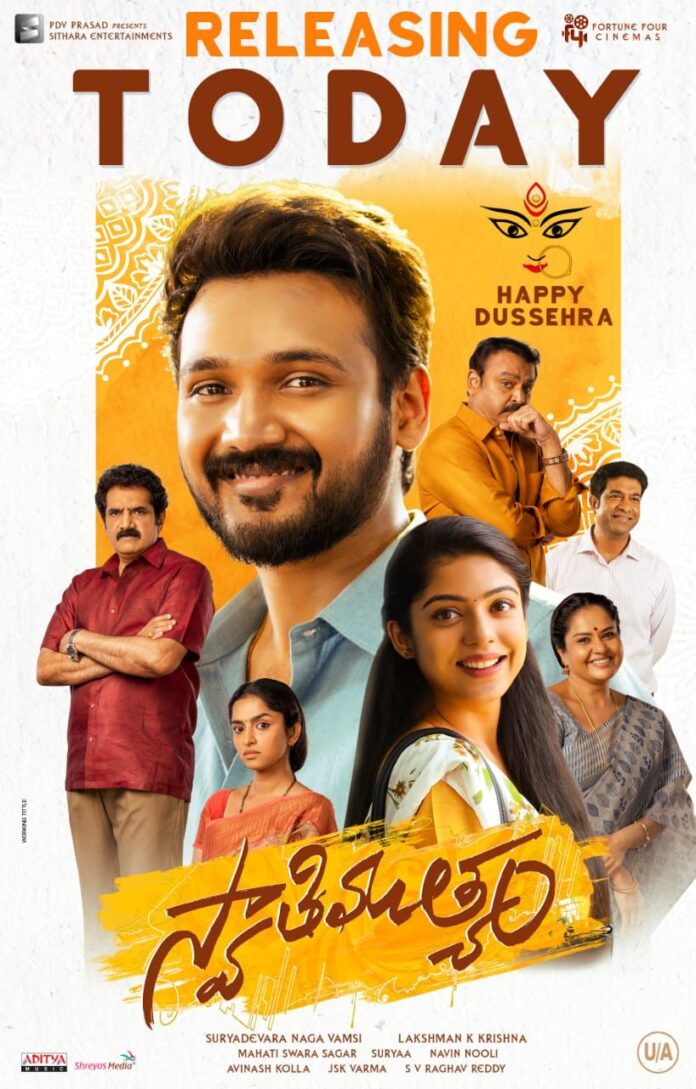 Swathimuthyam is a wholesome family entertainer film with full on hilarious entertainment. Bellamkonda Ganesh is perfectly apt for the film and he did his role with ease. Though the film talks about surrogacy, Director Lakshman K Krishna made the film as a complete family entertainer. Even kids will enjoy this film to the core. After DJ Tillu, Swathimuthyam will be one more feather-in-the-cap for producer Suryadevara Naga Vamsi.
Bellamkonda Ganesh and Varsha Bollama played the main lead roles and Senior Naresh and Rao Ramesh played the key roles. Lakshman K Krishna directed the film and Suryadevara Naga Vamsi bankrolled it under Sithara Entertainments. The film was released on 5th October, 2022. Check the review below.
Bala Murali (Bellamkonda Ganesh) works in the Electricity department and is looking for matches to tie the knot. Bhagya Lakshmi (Varsha Bollama) works as a school teacher. Bothe will see eachother in Pelli Choopulu and decide to tie-the-knot. On their wedding day, Bala Murali falls in big trouble and Marriage will be called-off. What is that trouble and how Bala Murali win’s Bhagya Lakshmi’s heart is the rest of the story.
Bellamkonda Ganesh is perfect for this film. He delivered his role with ease. He was good in emotional scenes and his comedy timing is perfect. There were no fights and dance moments in the film. Varsha played her role with perfection. She perfected blended in her role. Rao Ramesh and Senior Naresh have given their best. Their typical dialogue deliveries will entertain the audiences for sure. Goparaju Ramana’s character is hilarious. His character is full of entertainers. Vennela Kishore, Subba Raj and others delivered their roles according to the scripts.
As the film is a Hilarious entertainer, Dialogues and screenplay plays a vital role for movie success. The dialogues will make us emotional, tickle our funny bones. The punch dialogues are hilarious. Music by Sagar Mahathi is an added bonus. Songs are heart touching and background score is in sync with the film. Cinematography by Surya Teja is crystal clear. Whole film was shot in east godavari town and it looks real in every frame. Production values are high and quality of the film is grandeur.
More or less, The film is a team effort but we should appreciate the director for such kind of entertainment. Though the film talks about a bold point, Every frame looks innocent and Swathimuthyam is a perfect apt title for the film.
Swathimuthyam is a wholesome family entertainer. From Kids, family, youth and elders, everyone can watch this film. It’s full of entertainers. Don’t miss it.
Rating : 3.25 Out of 5