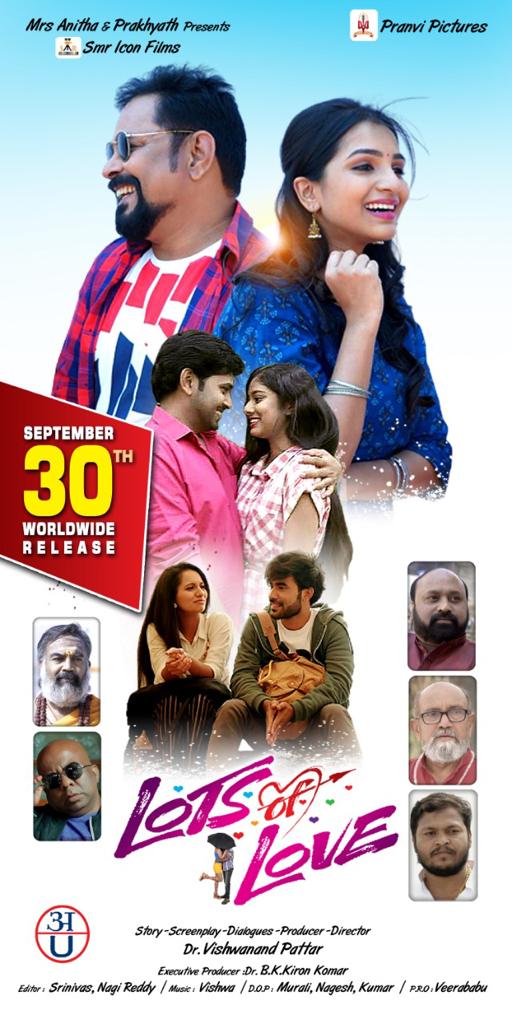 Lots of Love is a complete Entertainer
Lots of Love is a youthful entertainer. A Beautiful film with a thought-provoking message. It’s an anthology film packed with five films. all are different genres. one is a story of a doctor at the time of corona pandemic, a youthful love story in a bus, an orphan story, swamiji story and a story of a wicked zamindar. All the stories were well captured, and every story is filled with life. Vishwanadh Patar produced and directed this Anthology film under Pranavi Pictures Banner. The film was released on 30th September 2022. Check the review below….
First Story:
During Corona times, lots of people suffered for getting proper treatment in Hospitals. Some don’t get to bed in Hospital and Medicine was out of stock. A wise doctor (Vishwanadh Patar) treats patients with no fee. While helping the patients he become poor and stuck in debt. What happens to the Doctor is rest of the story.
Second Story:
Rakesh (Nihanth) and Manoja (Divya) travel in same bus for school. They both fall in love with each other, but their parents won’t accept their love. Watch the film to know what happens next.
Third Story:
An orphan (Rajesh) works hard and reach his goal by getting a job in reputed company. He falls in love with Rajani (Bhavana). Both decide to get marry but Rajani’s parents won’t accept him. Watch the film to know the back story.
Fourth Story:
A Swamiji (Kiran) who preaches word of God and an NGO (Madhavi) who helps the poor shares an illegal connection. See the film to know more.
Fifth Story:
A Zamindar Yadagiri (Telani Pantulu) is wicked. He blackmails the innocents with money and rowdyism. Likewise, his son, a Spoiled brat. How a wicked zamindar and spoiled brat corrupt the society is the last story.
All the five stories were made beautiful. All are heart touching and thought provoking. All the actors given their best.
Lots of Love film is all about Vishwanadh Patar’s talent. It’s a One man show, He wrote the story, dialogues, screenplay, He directed it and bankrolled it too. He even acted in first story. Stories are good, Screenplay is perfect, dialogues are neat and production values are rich. The film looks perfect with all ingredients. Music plays vital role in movie success. Songs are good and background score gives oxygen to the film.
Overall, lots of love is a beautiful film. Audiences will find themselves in the film. It is one of the finest films in Telugu cinema. Do watch it.
Rating: 3 out of 5