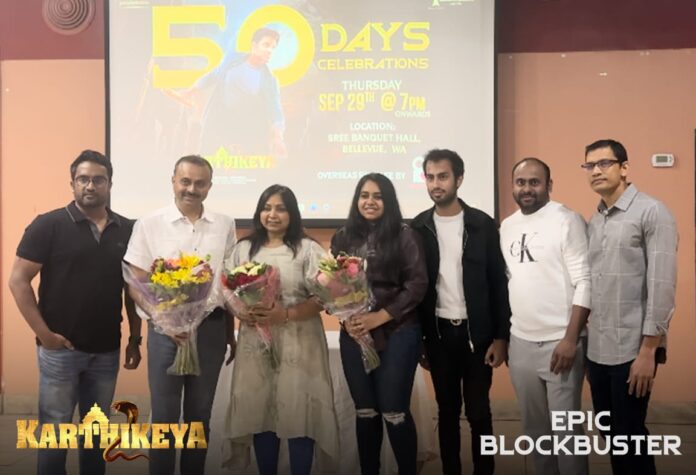 Nikhil’s Karthikeya 2 is continuing the dream run at the box office. The film is did extremely well not just in Telugu states but also in the Hindi belts and overseas. Karthikeya 2’ has emerged as a mega blockbuster in the USA with minting more than 2 million dollars.

The film recently completed a successful 50-day run, and for the first time, 50-day celebrations were held in the United States. Producer TG Vishwa Prasad attended the celebrations and thanked the audience for making the film a huge hit.

Karthikeya 2′ is the highest-grossing Telugu film in terms of return on investment in the United States. And the creators continue to be lauded and appreciated by all.

For their dedication and vision, the film team deserves all of these collections, appreciation, and accolades.

‘Karthikeya 2’, the sequel to the 2014 film Karthikeya is a supernatural mystery thriller film. Directed and written by Chandoo Mondeti, Produced by TG Vishwa Prasad and Abhishek Agarwal, Karthikeya 2 is also backed by stellar performances from Anupama Parameswaran, Srinivas Reddy, and Harsha.

Anupam Kher’s divine performance cannot be disregarded for the success of the Hindi version of the film also. Kaala Bhairavaa is the music director.