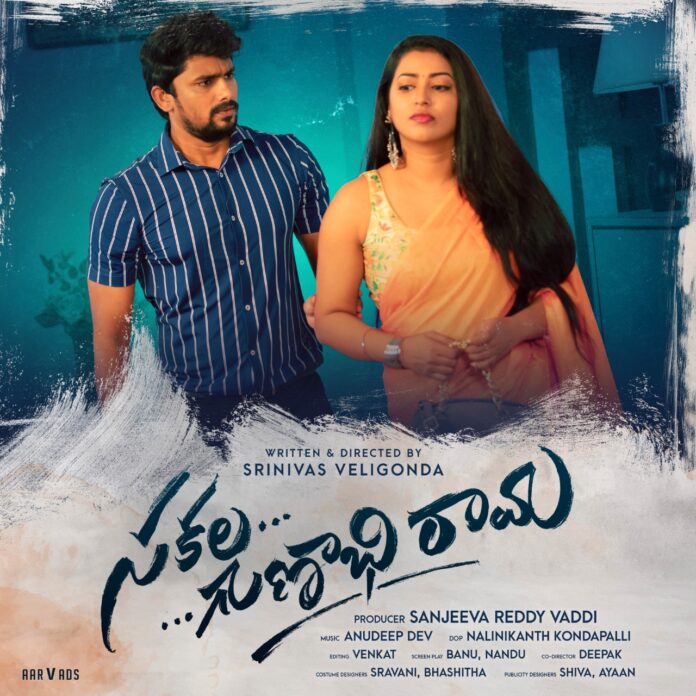 Sakala Gunabhi Rama is out and out family entertainer film with Heart Touching emotion towards the end. The film showcases the relationship between husband and wife. Director Veligonda Srinivas captured the family emotions in very entertaining way. First half of the film is very entertaining with youthful elements and second half triggers the core relationship of husband and wife. It’s a complete family entertainer and all married men and women should watch it to understand their better half.
Big Boss fame VJ sunny played the main lead role and Aashima will be seen as his wife. Shritej and Taruni Singh played the key roles. The film is directed by Veligonda Srinivas and Sanjeev Reddy Vaddi bankrolled it. The film is released on 16th September 2022. Check the review below…
Ram (VJ Sunny) and Swathi (Aashima) are young couple. Ram is a software employee and Swathi is a housewife. Though Ram is married, he looks for extramarital affair. To flirt with other girls, he even lends more money from a goon (Shritej). While having extramarital affair with a woman (Taruni Singh) he brings troubles in his life. how he manages that trouble and what happens to family life is rest of the story.
This is first film for VJ Sunny, He is young and handsome. His acting skills are up to mark and he fit the bill. His dancing skills are perfect and stylish. He carried the whole film on his shoulder and delivered his role with ease. Aashima is beautiful and she did her role with ease. She will lure youth audiences with her innocent face. Taruni Singh is gorgeous. Her oomph looks will tease youth and mass audiences for sure. She performed well in second half. Shritej is perfect as Goon. He looks elegant and strong. Sarayu, Mahesh Vitta and Chamak Chandra will tickle your funny bones for sure. Other actors come and go.
Music by Anudeep Dev is biggest highlight in the film. Songs are very good and well picturized. Background score has taken this film to next level. Music plays bigger role in movie success. Cinematography by Nalinikanth Kondapalli is crystal clear. Locations and shots were very natural. Editing is done by Venkat and screenplay was handled by Banu and Nandu. Production values are rich and director Veligonda Srinivas perfectly nailed the script. The dialogues in the climax will make audiences emotional.
VJ Sunny’s performance, Songs, Background score, Dialogues, Comedy track and Climax are bigger highlights in the film. This film will be huge hit if made with big stars like Hero Venkatesh.
Sakala Gunabhi Rama is complete family entertainer with huge entertainment and hilarious scenes. Family emotion scenes towards climax will win your heart. It’s a must watch film.
Rating : 3.25 Out of 5