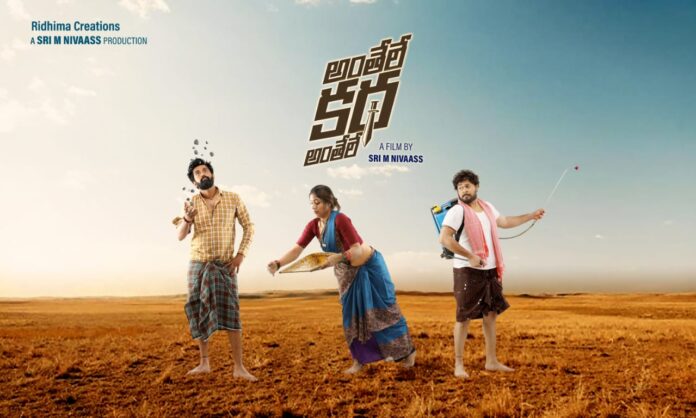 ‘Antele Katha Antele’ is an emotion-packed drama set in the backdrop of Anantapur. Ridhima Creations is producing the film with Tanish and Vikas Vasishta of ‘Cinema Bandi’ fame as heroes. Sahar Krishnan is its heroine. Srinivas has a key role. Sri M Nivaass, who has previously made ‘Maharajasri’ and ‘Lanka’, is wielding the megaphone. The film will go on the floors in September. The project was launched today in Hyderabad.

Speaking on the occasion, director-producer M Nivaass said, “We will start the shoot in September. The story takes place in a remote village in Rayalaseema and is laced with a variety of emotions. The film will be shot in three schedules in Anantapur, Nalgonda and Hyderabad.”

Actor Tanish said, “Subjects of this sort are attempted rarely. And the audience love to watch such rare movies. I have come out of my image for this project. Human relations are going to be shown in a new way in this movie. It’s a heavy-duty film. I hope this film becomes a hit.”

Vikas Vasishta said, “I am doing this after an acclaimed movie like ‘Cinema Bandi’. The emotions are rich in ‘Antele Katha Antele’. I loved the director’s narration and immediately got on board. The film doesn’t have too many dialogues but the emotions are going to work big-time.”

Sahar Krishnan said, “I am happy that I have been chosen for this content-driven film even though I am an untested performer. I thank the director and producer.”

Actor Srinivas said, “I am the son of veteran actress Sitanjali Ramakrishna garu. I have previously done quite a few movies. I am hoping that this film will fetch me fame.”