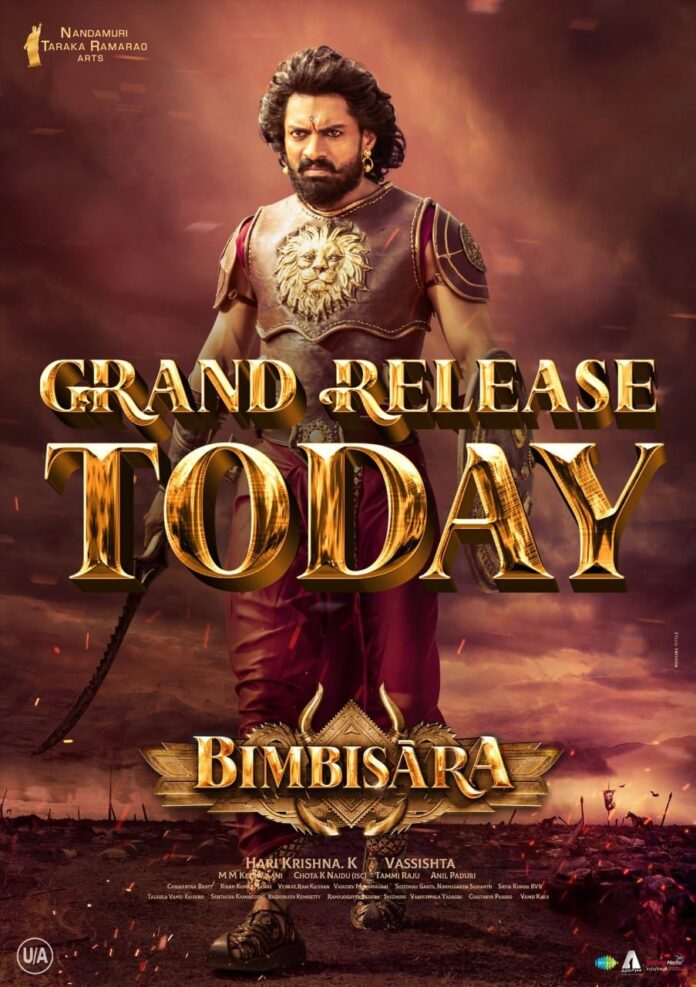 Bimbisara is one of the finest films in Kalyan Ram’s Entire career. It is his career best film. Kalyan Ram power played the title role and suits the bill. His makeover, performance, dialogue delivery, fight episodes and everything is packed with entertainment. It’s a commercial Entertainer with human emotions. The film is not less than any Baahubali film. Graphically, Bimbisara is a Grandeur film and it will treat you in all ways. Catherine Tresa and Samyuktha Menon played the female lead roles and MM Keeravani, Chirrantan Bhatt, Varikuppala Yadagiri composed music. Chota K Naidu handled the camera department and Tammi Raju edited it. Mallidi Vashist directed this big budget film. The film was released on 5th August, 2022. Check the review below…

Bimbisara (Nandamuri Kalyan Ram) is a Ruthless King of Trigartala Kingdom. He will go to any extent to win the war. In a mischief, Bimbisara travels through time and falls on Present Day. He suffered a lot at the time. On the other side, A wicked Doctor (Vivan Bhatena) will be waiting for Bimbisara to bluff his successful career. How Bimbisara handles Present and Past life is the rest of the story.

Nandamuri Kalyan Ram is just amazing as Bimbisara. The film will dig Gold for him for sure. This is a perfect film for him and he just nailed it. Catherine Tresa is gorgeous. Though her character is small, She made her presence felt. Samyuktha Menon is beautiful and she did her role with ease. Vivan Bhatena gave his best performance. Vennela Kishore and Srinivas Reddy will tickle our funny bones. Others did as required.

As the film is grand, Chota K Naidu’s camera work made the magic work. The film looks rich and it is a visual treat. Three Music directors, MM Keeravani, Chirrantan Bhatt, Varikuppala Yadagiri composed music for this film and background score filled life into the film. Songs were well composed and shot well. Dialogues were well written. CG work is another biggest asset for this film. Visuals, CG work will give a kick to the audiences.

Masudha Teaser will be out on August 2nd