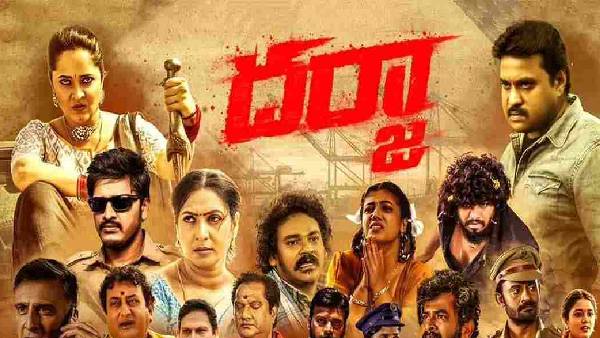 Anasuya is a Star Celebrity on Social Media. Though she wont play Lead roles, She gets whooping Red Carpet on the Internet. Many Youth and Mass Audiences lure her to the core. Parallely, Actress Anasuya leaves no stone unturned to entertain her fans. She chooses different kinds of roles and she surprises everyone. Recently in Pushpa, She did a typical negative role and she delivered her role with perfection.

Now, The star actress has come up with another challenging role. She plays a Villain in Darja. Though she plays a negative role, the whole film revolves around her and She carries the film on her shoulders. Darja will be a feast for Anasuya Fans. It’s a Mass action entertainer. Comedian cum Hero Sunil plays an important role. Many popular actors like Shafi, Shakalaka Shankar, Prithvi, Shammu, Arun Varma, Shireesha, Aksha Khan, Amani, Sameer, Naga Mahesh and others played important roles. The film is directed by Saleem Malik and Siva Sankar Paidipati, Ravi paidipati bankrolled it. The film is released on 22nd July, 2022. Check the review below….

Bandar Kanakam alais Kanaka Mahalakshmi (Anasuya) is Notorious Gangster in Bandar and surrounding Areas. She kicks everyone’s Ass to control them. She doesn’t even care about the Police, instead the police will be scared of her.  Parallely, Lover Boy Ganesh (Arun Varma) commits Suicide as he gets cheated by his lover Pushpa (Sirisha). Ganesh’s brother Ranga (Shammu) will be after Pushpa to kill her.

As everything gets tensed, ACP Siva Shankar (Sunil) comes to chase Ganesh’s Suicide case and paralley, He will be after Bandar Kanakam to see her end. How ACP Siva Shankar chased the case is the rest of the story.

Anasuya is a bundle of talent. She is a versatile actress and she delivers any role with perfection. In Darja, Anasuya nailed it. It’s a Trailer Made film for her and she delivered it with perfection. Hero Sunil is an added attraction for this film. His comedy timing, dialogue delivery, action episodes and everything is just perfect. Executive Producer Ravi Padipati played a key role in this film. All major star cast, Shafi, Shakalaka Shankar, Prithvi, Shammu, Arun Varma, Shireesha, Aksha Khan, Amani, Sameer, Naga Mahesh and others give their best.

Rap Rock Shakeel’s music is one of the major highlights in the film. Background score has given more energy to the film. The Mass song will give a kick to the audiences. Fighting episodes are another major highlight ion the film. Story, Screenplay is neat and director Saleem Malik handled the film perfectly. Production values are high and a lot of money was spent while shooting it.

Darja is a complete mass entertainer with Anasuya’s magic. Youth and mass audiences will watch this film in repeat mode. Go and Watch it.

Masudha Teaser will be out on August 2nd