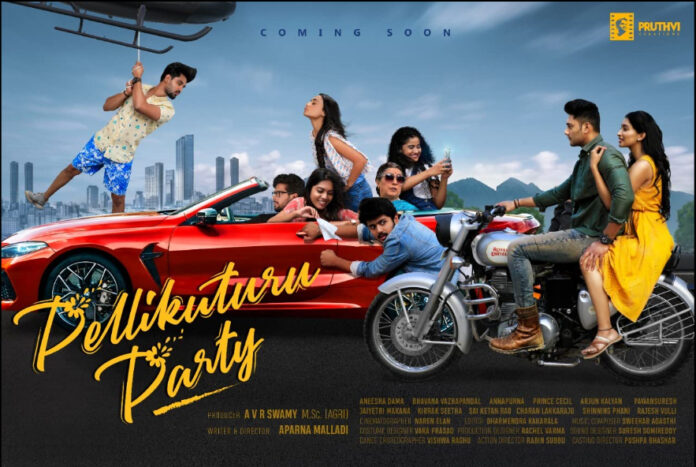 Pellikuturu Party is a hilarious entertainer with many surprising twists and turns. Young actors Prince and Aneesha Dama, Arjun Kalyan, Seeta, Jayatri, Saikeerthan and Phani played important roles in the film. The film is all about Spinster’s Party. It’s a Hilarious Youth entertainer with comedy punches, action episodes and family emotions. Hero Prince and Heroine Aneesha Daama nailed their characters with outstanding performances, Sweekar Agasti’s Music made this film more entertaining, Director Aparna Malladi directed this contemporary youthful film and Swamy produced it. The film is released on 24th June, 2022.

The film begins with a Marriage discussion. Aneesha Dama’s elder sister Nandu will be tying the knot soon and Aneesha kisses her Sister’s would-be husband. Aneesha feels guilty and she decides to change the bridegroom. Aneesha plans a Spinster’s party. Many hilarious twists and turns will occur in their party. To know, what happens in Spinster’s Party, Watch Pellikuturu Party in Theaters.

Aneesha Dama steals the show with her terrific performance. She carried the whole film on her Shoulders. She delivers her role with ease and her comedy timing is perfect. She is gorgeous and youth audiences will fall in love with her. After DJ Tillu, Prince is getting good films. His character is very good and he is full of entertainment. Senior Actress Annapurna will tickle your funny bones with her punches. Many young actors delivered their role with perfection.

As the film is a youthful entertainer, Music plays a key role in the film. Music director Sweekar Agasti composed beautiful songs and background score will keep us engaged with the film. Dialogues are very hilarious and few will make you emotional. Cinematography and locations are rich and production values are high. Story is youthful and the screenplay is just perfect. Director Aparna Malladi has a bundle of stories to tell. She mainly concentrates on female oriented films. She knows the power of Women and she always enlightens them.

Pellikuturu Party is the story of Every Woman and Everyone should watch it. The film is hilarious and twists and turns will give an edge-of-the-seat experience. The climax will make you emotional. It’s a complete entertainer film without any vulgarity. Everyone can watch it.