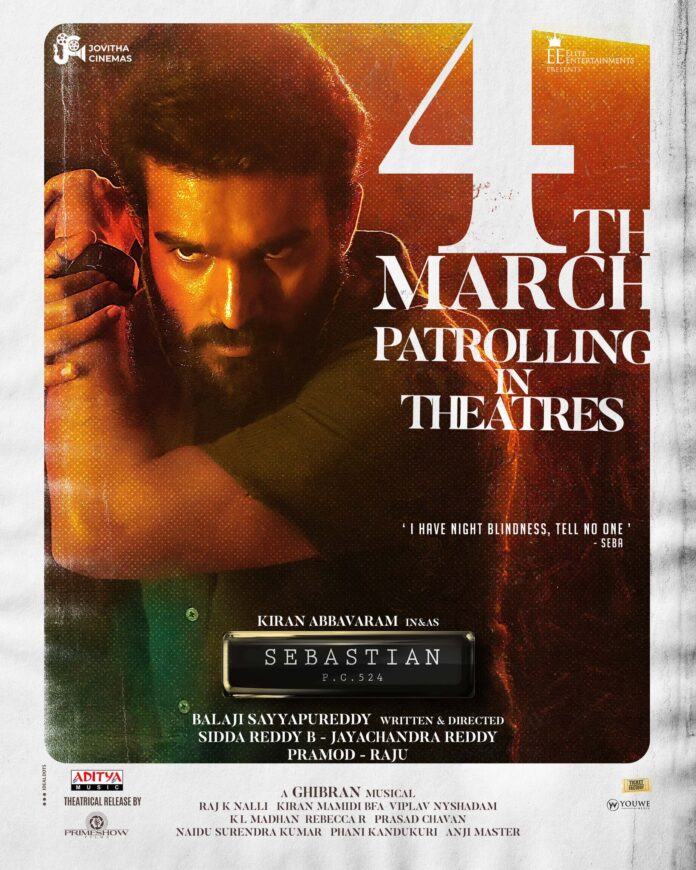 Kiran Abbavaram’s ‘Sebastian P.C. 524’ to be released on March 4

Kiran Abbavaram, who got introduced with ‘Raja Varu Rani Varu’, has attained recognition as a distinctive hero in Tollywood. His second film ‘SR Kalyanamandapam’ was a solid hit in 2021. From class to mass audiences, from youths to family audiences, he has been loved by all sections of audiences. ‘Sebastian P.C. 524’, which is written and directed by Balaji Sayyapureddy, is his next film. He is on a hat-trick. Produced by Jovitha Cinemas and presented by Elite Entertainment, the film is being produced by B Sidda Reddy, Jayachandra Reddy, Pramod and Raju. Namratha Darekar (aka Nuveksha) and Komali Prasad are its heroines.

Prime Show Entertainment is releasing the promising movie in theatres on March 4.

In this regard, the producers today said, “Kiran Abbavaram has been on a success-delivering spree. He is surely going to score a hat-trick with ‘Sebastian’. Ghibran’s music is awesome. The listeners have showered their love on the song ‘Heli’ in a big way. The recently-released teaser has been trending heavily. The audio, released on Aditya Music, has been evoking a tremendous response. Night blindness is the backdrop of the story. The male lead suffers from the issue and he becomes a cop. How does he manage night shifts? What kind of practical issues does he face? These plot points have been narrated in an exciting way in our movie.”