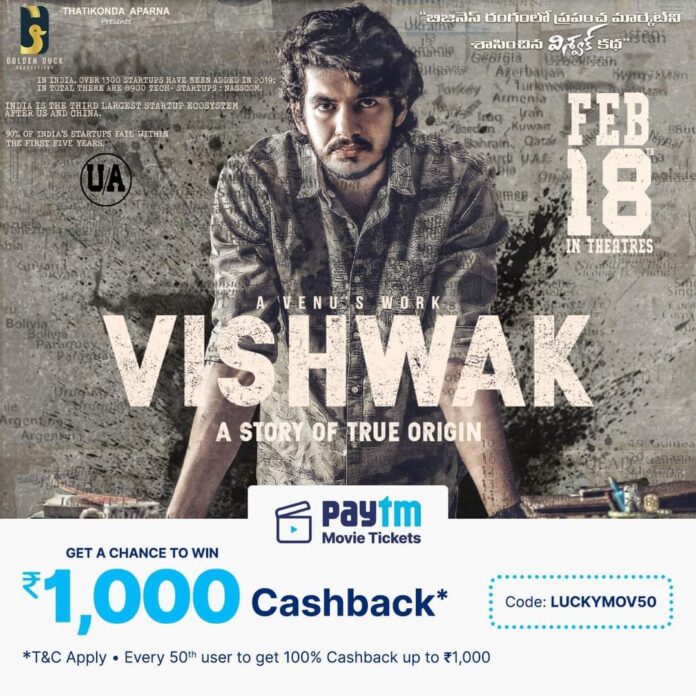 Vishwak movie featuring Ajay Kathurvar is released on 18th February, 2022. The film is directed by Venu Mulka and  Thatikonda Anandam, Bala Krishna produced it under Golden Duck Productions banner. The Trailer has created a huge buzz in social media. Lets check the Review…
Vishwak (Ajay Kathurvur) loves his country. He always thinks big of doing big things for the country but his father wishes to send him aboard for Better life. Vishwak insists his father to trust him and starts a start up company. He finds no investors to invest on his idea. His company collapses and he loses everything. One day he kidnaps a youngster who is flying to the USA and a local leader. He threatens NRIs and warns them to return to India. Why does Vishwak kidnap and why does he threaten NRIs ?. Find the answers by watching the film.
Hero Ajay is a perfect apt for the film. His Allegiant look suits the role. It’s a one man show and all credit goes to one and only Ajay. Many young actors made their performance felt.
Music is just amazing in the film. Hyderabad Maha Nagaram, Prashninchu songs are very good songs. Cinematography is decent with rustic visuals. Dialogues are huge and powerful. There are many goosebump scenes and dialogues. The second half is a bit lengthy and trimming is needed for the film. Story is very fresh and the young generation will connect with the film. The Screenplay and direction by Venu Mulka is outstanding. His story, Dialogues and emotions will make you fall in love with him. The director will soon see many heights.
The film talks about our Indian system. It’s a thought provoking, strong content film and Every youngster should watch it. The film talks about Farmers Suicide and Youngters suicide. It’s a Hard hitting story for every youth. Go and Watch it.
Rating : 3.25/5