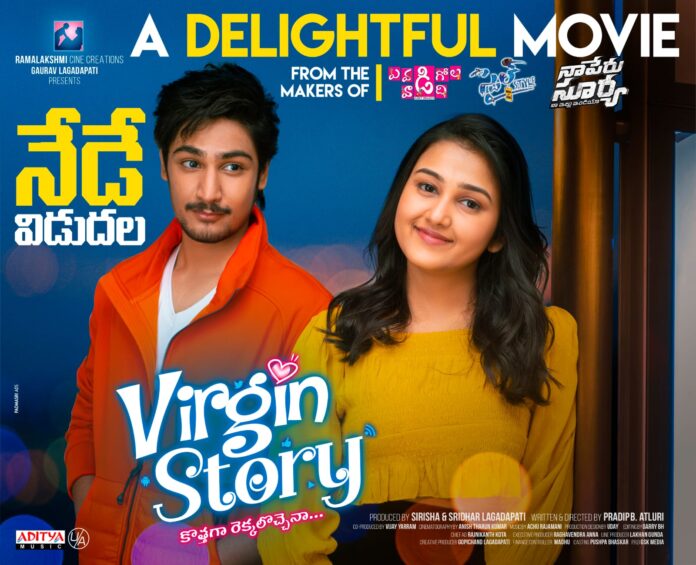 Virgin Story is a Youthful entertainer loaded with comedy punches, twists and turns. The film is hilarious and every teenage boy or girl will fall in love with the film. The film is very neat and clean like no boozing, no drugs and just entertainment. Popular Producer Lagadapati Sridhar’s Son Vikram Sahidev played the main lead role and Sowmika Pandian played his Love Interest. Pradip B Atluri directed this youthful entertainer and Lagadapathi Sirisha and Lagadapati Sridhar bankrolled it. The film was released on 18th February, 2022.

The Film kick starts with a cheating Love Story. The Lead actress Priyanshi ( Sowmika Pandian) will find her Boyfriend cheating on her. Frustrated girlfriend decides to take revenge on her Boyfriend by hookup with an unknown guy. She hooked up with a Virgin teenager Vikram (Vikram Sahidev). How their hookup story takes many turns is the rest of the story.
Vikram Sahidev is Perfect as Teenager. His performance, Dancing style, dialogue delivery, comedy timing, everything is just perfect. Virgin Story is trailer made film for Vikram Sahidev. His Parents, Lagadapati Sirisha Sridhar will be proud of him. Sowmika Pandian is beautiful and She delivered her with ease. She will lure youth audiences with her innocence. Young actress Rishika Khanna will entertain with her typical acting style. The Punjabi youngster will tickle your funny bones for sure. All the actors and actress Performed well in the film. The film will be treaty meat for youngsters.
It’s Visual treat film with beautiful pubby locations. Music by Achu Rajamani has taken this film to next level. Music is very fresh. Dialogues are very trendy and fashionable. production values are high.
It’s a decent film with no vulgarity. Parents can take their young children to this film, Though it’s a youthful film, Whole film can watch it together. It’s a must watch film for Parents as they can understand their young once.
Overall, It’s a youthful entertainer. Youngsters, bunk your college and Go watch this film. You guys will love it.
3/5