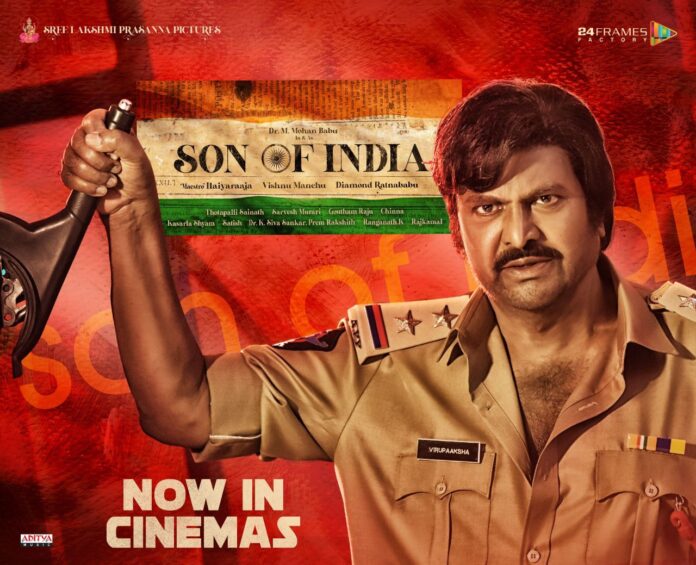 Serial Kidnaps will shock the NIA. The NIA Officer (Pragya Jaiswal) will be investigating the case and she discovers the shocking truth about a Car Driver (Manchu Mohan Babu) who works for Same NIA.  Who is that Car Driver, Why he is kidnapping and what is his back story is the rest of the film.

After a long time, We see Manchu Mohan Babu on the silver Screen. His energy levels are as good as he is as a young actor. His typical dialogue delivery will entertain us. Son of India is a One-Man-Show and it’s a complete Action Entertainer. Other actors, Pragya Jaswal, Srikanth, Tanikella Bharani, Naresh, Ali, Vennela Kishore, Prudhvi Raj, Raghu Babu, Raja Ravindra, Ravi Prakash and others gave their best.

As the film is a political action entertainer, Dialogues play an important role and Manchu Mohan Babu nailed it. It will be a treat for his fans to hear his typical dialogues. Music Director Illayaraja gave his best music. Background music has taken this film to the next level.  Camera Work is good, Editing is scrip. The run time is less and the film is sharp with no Nonsense. The production values are high.

We can see New Mohan Babu in this film. His getups will entertain us. Director Diamond Ratna Babu wrote a meaty role to Mohan Babu and he delivered it perfectly. The twists and turns will boost the audiences for sure. The concept of Private Jail System is good. More or less, Son of India is a good entertainer with less run time.

Son of India is One-Man-Show, Manchu Mohan Babu’s fans will fall in love with the film. The film is a complete entertainer with nice twists and turns. It will be a treat to watch Manchu Mohan Babu in different getups. Overall, A Decent film with power packed dialogues and political essence, Worth Watching it.