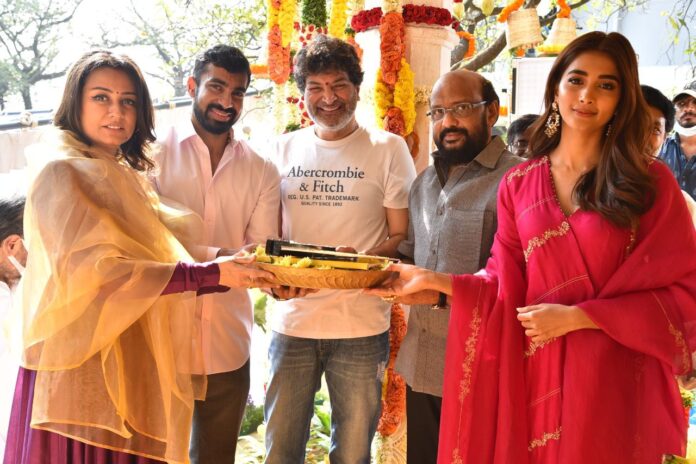 Superstar Mahesh Babu’s much-awaited hattrick collaboration with director Trivikram, produced by Haarika and Hassine Creations, goes on floors
The hattrick collaboration between Superstar Mahesh Babu and writer-director Trivikram, bankrolled by leading producer Suryadevara Radha Krishna (China Babu) under Haarika and Hassine Creations, officially went on floors today (February 3, 2022). The film commenced at 9.53 am in the premises of Ramanaidu Studio, Hyderabad with a brief pooja ceremony in the presence of the film’s cast, crew and other dignitaries. While Mahesh Babu’s better half, actress Namrata Shirodkar clapped for the first sequence featuring Pooja Hegde, eminent industrialist Suresh Chukkapalli had switched on the camera.
Pooja Hegde, who’s established herself as a leading actress and a commendable performer over the years, plays the leading lady in the film. There has been immense hype and expectation among movie buffs ever since #SSMB28, the project between Trivikram and Mahesh Babu, was announced a few months ago. The team behind the film is working day and night to live up to their expectations, wrapping up the film’s pre-production formalities at a brisk pace.
Mahesh Babu and Trivikram’s earlier films Athadu and Khaleja enjoy a cult following even now and the fans’ long wait to see them work together again has finally ended. Their excitement and joy know no bounds with the much-awaited project taking off today. The film’s principal shoot will commence in April. More details surrounding the film’s cast, crew will be announced shortly, shared S Radha Krishna at the event.