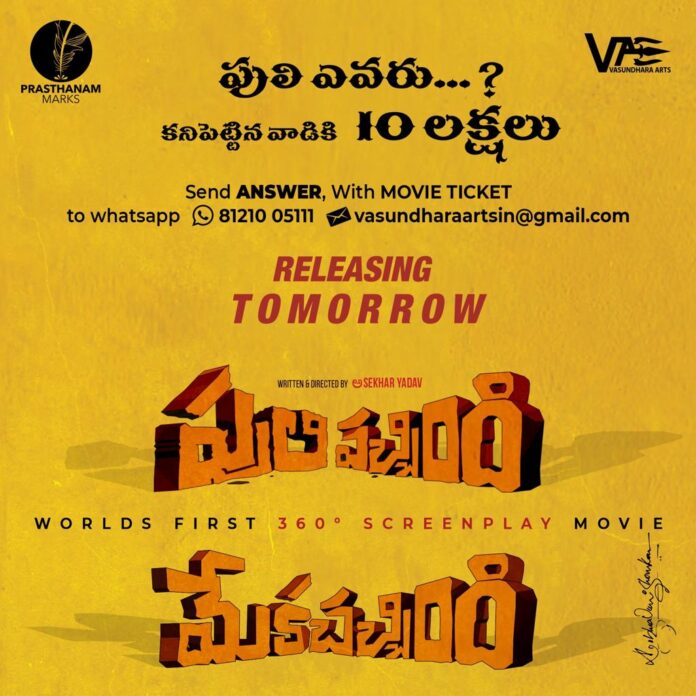 Puli Vachindi Meka Sachindi movie is one of the best film for it’s screenplay, cinematography, editing and out-of-the-box story. The editing and elevation shots will blow your mind. The story is very fresh and screenplay is international. It’s a new kind of screenplay story on Telugu screen. Chitram Seenu, Anand Bharathi, Niharika Reddy, Vasudev, Varsha and Others played the main lead roles. The film is directed by Shekar Yadav and produced by Bhavani Shankar Kondoju. The film is released on 17th December, 2021. Check the review below…
Robert (Chitram Seenu) and Aruna Kumari (Niharika Reddy) were married couple and Yogi (Vasu Dev), Vaishali (Varsha), Manu were their kids. Yogi and Vaishali were grown up and Manu is school going kid. All the four members of the family, Father Robert, Mother Aruna Kumari Brother Yogi and Sister Vaishali will be against Manu and all the four family members plan to kill Manu. But One day, Shockingly, Robert and Aruna Kumari will be found dead at their house. Did Manu Killed their parents, What will happen to his brother and sister and why family members want to kill the school going kid is rest of the story.
All the major character actors did well in their role and Kid performance is just outstanding.
As the film is all about screenplay technic story, Background score plays major role in the film. Music director Subhash Ishaan has given life to the film. The background score is tariff and it will stick you to the film. The screenplay play important role in the film. If you miss any scene in the film then you may not understand rest of the film. The screenplay is tight and gripping. The cinematography by Kiran Kumar Thekonda is another major highlight. The slow motion shots, elevation shots will give you goosebumps. Dialogues were written by Natmika and Editing done by Srinivas Annavarapu. Production values are decent and direction by Shekar Yadav is top notch. More or less, the film looks rich with elevation shots, editing techniques, cinematography visuals and screenplay. It’s a one man show and whole credit goes to director Shekar Yadav.
Puli Vachindi Meka Sachindi is a signature dialogue from Allu Arjun’s Ala Vaikuntapuramloo. The title has raised the expectations of the film and it will entertain you for sure. The film is Edge-Of-The-Seat thriller with all emotional ingredients. It’s a technical brilliant film. Worth Watching.