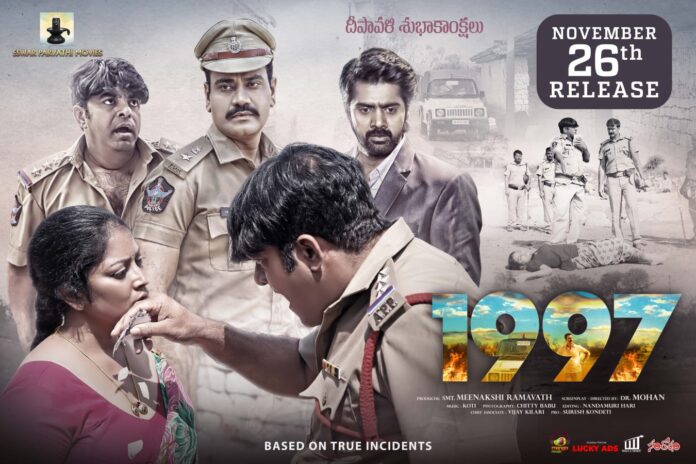 The 1997 film is all about untouchables and the Caste System. The film is based on True Incidents that happened in a remote village in 1997. Dr. Mohan has penned the story and screenplay, Played the lead role and Directed it. Young Actor Naveen Chandra did crucial role and Srikanth Iyengar, Ravi Prakash did important roles in the film. Music is composed by Koti, Cinematography done by Chitti Babu, Editing by Nandamuri Hari and Meenakshi Ramavath bankrolled the film. The film was released on 26th November, 2021. Check the review below…

The film begins with a Flagellation. A child will be whipped as he belongs to a lower caste and enter a Holy Place. Ruling Party MLA, Dora carries the ritual of Upper Caste and Lower Caste and punishes the poor people. Even the police department never interfered in his doings. Vikram Rathod (Dr. Mohan) takes charge of Nizampet Police Station as ASP. CI Chary (Srikanth Iyengar) and Ramesh (Ravi Prakash) are his subordinates. A Poor family comes to the Police Station to complain about a girl child missing. CI Chary will ignore them but  ASP Vikram Rathod takes the case seriously. The Girl Child Missing case will revolve around Rape, Murder and Casteism. How ASP Vikram Rathod chases the case is the rest of the story.

Dr. Mohan who played the main lead role is the heart of the film. He delivered his role with ease. His character was well written and Dr. Mohan lived upto the expectations. Young actor Naveen Chandra played a very important role in the film. He takes this film to the next level. Srikanth Iyengar’s role is outstanding and he nailed it. He will entertain mass audiences with his typical acting style. His role is one of the major highlights. Ravi Prakash did his role as required, Actor Rama Rao did an important role and Young actress Suma, Ramya, Benergy and others did as required.

As the film is a Crime Thriller, Music plays a very important role and Koti garu has taken this film to next level. Emi Batuku song sung by Mangli is just outstanding. The Background score will engage the audiences. The locations are very natural and Cinematography by Chitti Babu is crystal clear. The dialogues are thought provoking. Screenplay is interesting and directed by Dr. Mohan is perfect. The film has all ingredients for a perfect Crime Thriller.