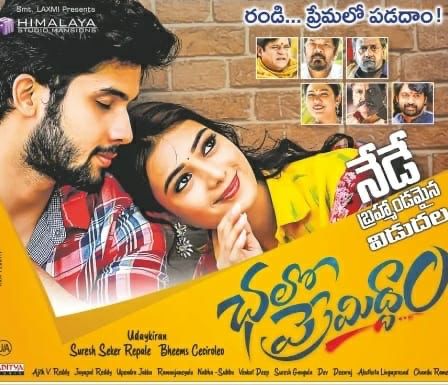 Chalo Premindham is a Youthful Love family entertainer film with Mass Action episodes. First Half is youthful with college episodes and hilarious comedy punches. Second Half is power packed with action episodes, twists and turns and family emotions. Chalo Premindham is a complete family entertainer with all commercial ingredients. Sai Ronak and Neha Solanki played the main lead roles and Nagineedu, Shashank, Baahubali Prabhakar, Posani Krishna Murali and Hema played other important roles. The film is directed by Suresh Shekar Repalle and Uday Kiran produced it under Himalaya Studio Mansions banner. The film was released on 19th November, 2021. Check the review below…

Rao (Sai Ronak) comes to the city for higher education. He falls in love with his classmate Madhu (Neha Solanki). Both will be in deep love and don’t want to be apart for a single second. The Love birds will attend Madhu’s sister’s wedding at her Home town. Madhu’s uncle Peddapa (Nagineedu) is a powerful man in that village and many wicked people will be after his life to take his place. Rao and Shivudu (Shashank) will be protecting Peddapa.
one Suddan Day, Madhu gets Kidnapped and Rao will be arrested for Murder attempt. How Rao comes out of Murder case and how he safes Madhu and her family is rest of the story.
Sai Ronak is young and energetic. He blended well in the role. Neha Solanki is gorgeous and she will lure youth and mass audiences for sure. Posani Krishna Murali’s character is very hilarious with his typical comedy punches. Nagineedu’s role is very powerful and he fits the bill. Baahubali Prabhakar played a very crucial role. Others did as required.

First half of the film is very youthful. Youthful love, slapstick comedy and one-liners will entertain the audiences. The Interval bang takes the film to the next level. The whole second half is power packed with action episodes and family emotions.  The music by Bheems Ceciroleo is one of the major highlights in the film. The songs were good to watch and the background score has taken this film to next level. The action episodes are power packed and very gripping. The Story is very regular but the screenplay has given a fresh look to the film.  Director Suresh Shekar Repalle made this film in an engaging and interesting way. The screenplay will keep us glued with the film.