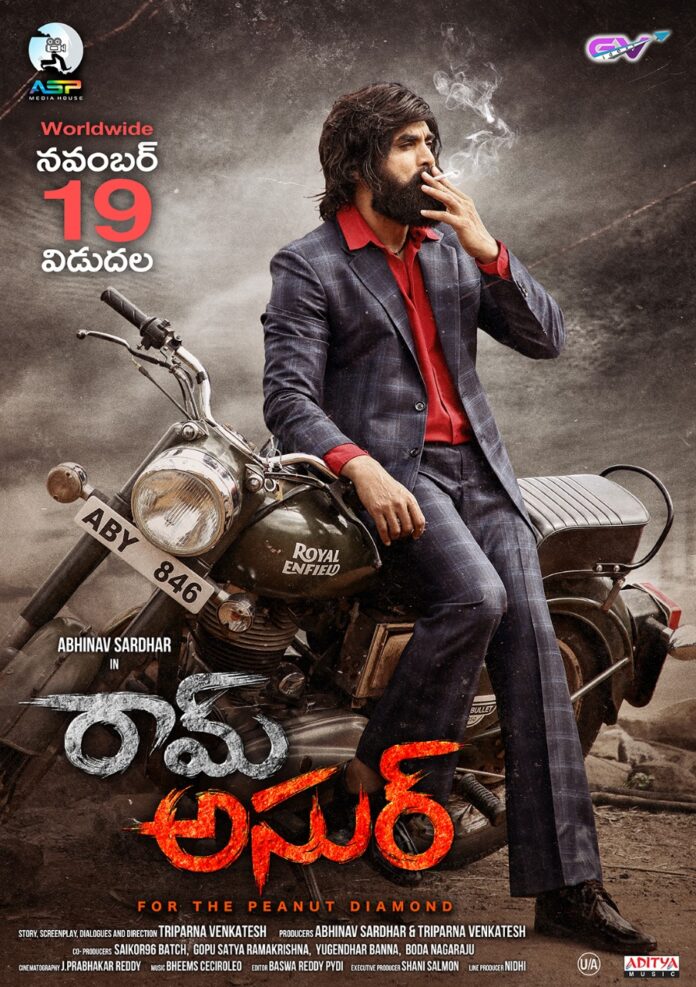 Ram (Ram Karthik) is a young scientist. He tries to discover a synthetic diamond but fails due to his failed love story with Priya (Sherry Agarwal). With the help of a Guru (Shubhalekha Sudhakar), He comes to know the story of Suri (Abhinav Sardar) and discovers a shocking truth about Suri. What is that shocking truth, What happens to Ram’s Love story, will he discover Synthetic Diamond is the rest of the story.
Abhinav Sardar is a Macho Man. His character will entertain the audiences for sure. The Action episodes are power packed and Abhinav looks like a roaring lion. His character and get up are very fresh and he blended well in the role. Ram Karthik is good in his role. He delivered his role with ease. Chandini is beautiful and she did her role with ease. Sherry Agarwal will lure youth audiences with her oomph looks. Suman and Shubhalekha Sudhakar did their roles with ease. Shani Sultan did a meaty role. He played a key role in the film. Others did as required.
As the film is an action entertainer, Fights were a major highlight in the film. Fight master U Shankar composed powerful mass fights. There are around four fights and all fights are just outstanding. The love episode of Ram Karthik and Sherry Agarwal will entertain the youth audience. The story concept is very different. Discovering a Synthetic Diamond is a fresh tale on Telugu Screen. Locations and Cinematography by J Prabhakar Reddy were very natural. Production values are decent and good money was spent while shooting. The Music composed by Bheems has filled life in the film. The background score will keep the audiences engaged. Screenplay and direction by Venkatesh Triparna has given a fresh look to the film. The film is short and sweet with zero boring episodes and power packed action episodes with gripping screenplay and twists and turns.
Ram Asur is an out and out action entertainer.  The action movie lovers will love this film. Family audiences can watch this film. Give a Try.
Rating : 3/5