Home Entertainment Telangana Devudu is an outstanding film with a huge star cast and... 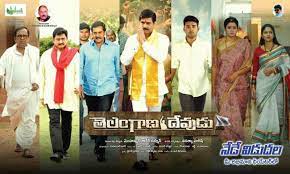 Facebook
Twitter
Pinterest
WhatsApp
Telangana Devudu is the real life story of Telangana Chief Minister K. Chandra Shekar Rao. Hero Srikanth played Elder KCR’s role and Jishan Usman is playing younger role. Vadatya Harish directed the freedom fighter film and Mohammad Zakeer Usman bankrolled it. Sangeetha, Brahmanandam, Sunil, Suman, Bharmaji, Venkat, Prudhvi, Raghu Babu, Shayaji Shinde, Vijay Ranga Raju, Benerji, Chitti Babu, Madhumitha, Satya Krishna, Sana, Rajitha, Etv Prabhakar, Sameer, Bus Stop Koteswara Rao, Kasi Vishwanth, Gemini Suresh and others played the neccasary roles. The film is released on 12th November, 2021. Check the review below.
Before Telangana State is Formed, In Andhra Pradesh, Other than Hyderabad, the whole Telangana region was backward without any development. There will be no development and no Jobs for Telangana people. If Telangana becomes an individual state, The development might take place and Telangana region people may get decent jobs in their territory itself. The development will lead to Bangaru Telangana. Kalvakuntla Chandrashekar Rao (KCR), the Chief Minister of Telangana State has dreamt about Bangaru Telangana and he made it possible. Telangana Devudu film is all about KCR, the film projects his childhood, college life, his interest towards Special Telangana and his political life. The film showcases the mirror image of KCR and the film is outstanding. KCR’s fans and Telanagan people will love this film to the core.
After the Telangana Formation, We came across many Telangana Movement films but nobody showcased KCR’s life. This film showcases KCR’s childhood, college days, the beginning days of his political life and his love towards Special Telangana. Young actor Jishan Usman played KCR’s younger role and he delivered it with ease. The Elder KCR role was portrayed by Srikanth and his performance is outstanding. There is a huge casting in this film and all the actors lived up to our expectations. 1969 movement, Special Telangana Movement, Kaleshwaram Projects are major highlights in the film.
Though it’s a freedom fighter film, Director  Vadatya Harish showcased it in a commercial way. The action episodes, Songs blended well in the film. Sangeetha played as KCR’s wife and Madhumitha played Kavitha’s role. Versatile actor Ajay played KTR’s role. Overall, the film looks like a big budget film with a huge star cast. The production values are high and the film is outstanding.
Telangana Devudu is an outstanding film with a huge star cast and gripping story. Telangana people will love it to the core. Do Watch it.
Rating : 3.5/5