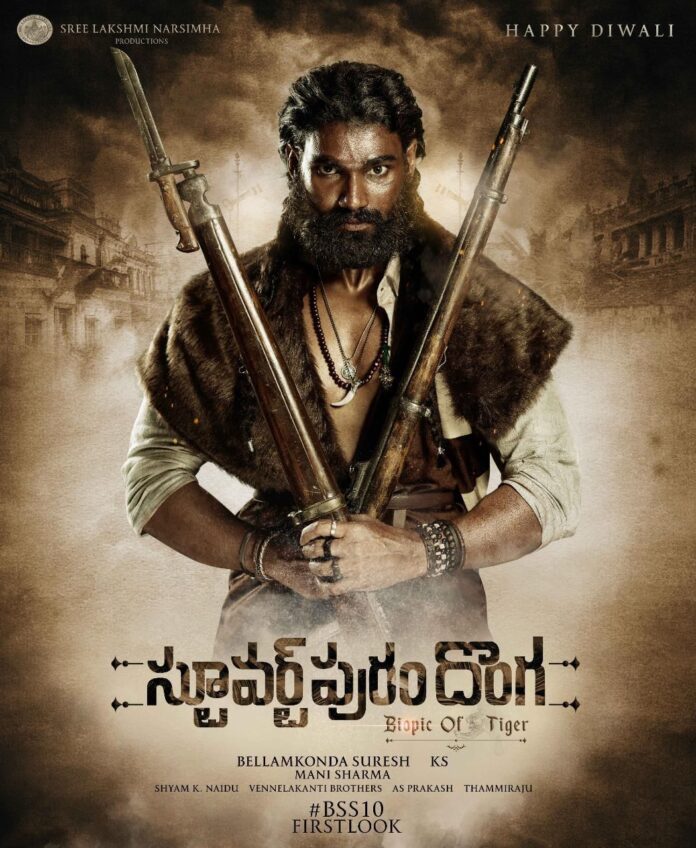 The film is a biopic of ‘Tiger’ Nageswara Rao, a notorious and courageous thief of Stuartpuram in the 1970s. Aptly, the first look poster feature Bellamkonda Sai Sreenivas in a ferocious manner, the poster shows him standing by holding two rifles in stylish way.

It is evident with the poster that the actor has undergone a massive transformation for the role and the film will take the audience to the times
of Nageswara Rao, known for his smart way of escape from police and prison too.

In fact, in the first look poster itself, Bellamkonda Sai Sreenivas has made the ‘Tiger’ come alive, one can say. This film has all the qualities to become a landmark in his career.

In short, the life story of ‘Tiger’ Nageswara Rao is a perfect cinema material and Bellamkonda is obviously the right choice for ‘Stuartpuram Donga’. It indeed is an apt title for the film on the most wanted thief.

Mass director VV Vinayak’s protégé KS will be helming it as his debut directorial venture, wherein producer Bellamkonda Suresh of the prestigious banner Sree Lakshmi Narasimha Productions is making a comeback to film production and Stuartpuram Donga is being made on large scale.

A wonderful script is prepared and all the required commercial ingredients are included in the right proportions. Vennelakanti Brothers are the writers for the film. Since the story is set in the 70s and 80s, popular technicians are zeroed in to be part of this high-budget entertainer.

Melody Brahma Mani Sharma scores music. Shyam K Naidu handles the camera, while Thammiraju is the editor and AS Prakash is the art director.

Other details of the project will be unveiled soon.