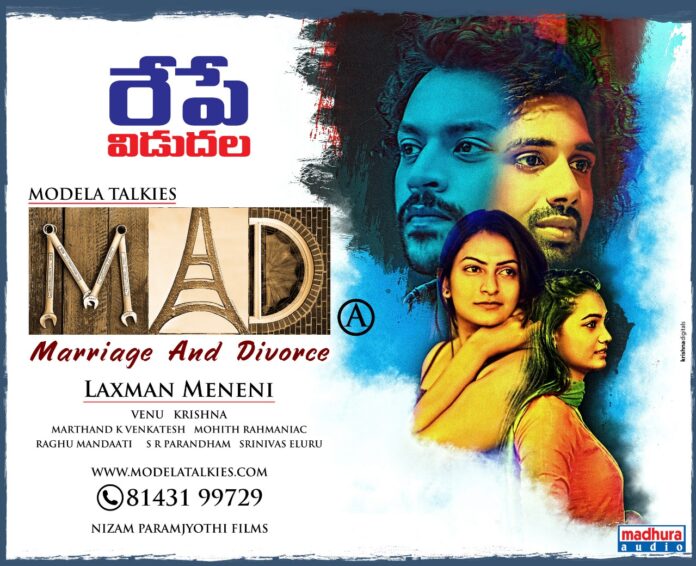 MAD film is all about Love, Sex, Romance and Family Emotions. MAD (Marriage And Divorce) tells about Contemporary family issues which every one comes across in their day to day life. Director Lakshan Myneni showcased the film in very poetic way. The film is blended with Love, Romance and Emotions. Even the Love making scenes were captured in very poetic way. We can find all emotions in the film. It’s a Must watch film for today’s young generation. If you are married, Watch this film. If you are getting married then watch this film. MAD is a Youthful entertainer and worth a watch.

Maddy (Madhav Chilukuri) and Aravind (Rajith Raghav) are both good friends. Maddy is a Rich guy but Play Boy. If he desire for a women, She will be on his Bed. Aravind is Bindass and enjoy Maddy’s company. To fulfill his Parents desire, Maddy tie knot to Madhuri (Spandana Palli). Madhuri is typical girl, She lives in her own world. She avoid Maddy from day one. Finally they both apply for Divorce. What happens to Maddy and Spandana, How they discover their Love is rest of the story.

On the other side, Aravind and Akela (Swetha Varma) love each other. They both cross every limit and starts live-in Relationship. But due to late night parties and Alcohol drinking, Akela avoid Aravind. How Aravind and Akela patch up is rest of the story.

All the actors, Madhav Chilukuri, Spandana Palli, Rajith Ragav and Swetha Varma, lived in their roles. Madhav is good in his role. He performed well. Rajith Raghav will entertain everyone with his typical acting style. His performance and characterization will be one of the major highlight. Hope to see them in big budget films. Spandana Palli looks homely in her role and she delivered her role with ease. Swetha Varma’s role will be jaw dropper. She will lure youth audiences with her romantic scenes. Character actor Appaji did promising role and Others did as required.

As the film is a romantic entertainer, Background score is major highlight and Music director Mohith Rahmaniac nailed it. The Songs are good and background score will keep us in engage. The Locations are nice and very realistic. The dialogues will make us emotional. Production values are high and Locations looks expensive. Story is routine but screenplay magic makes this film worth watching.

Both are stories are just amazing. Audience will find themselves in these four characters. It’s a Beautiful heart touching film. Go and watch it.