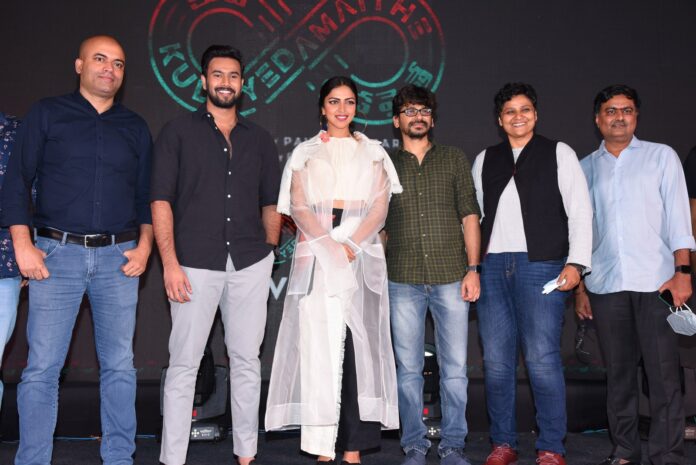 The D-Day is arriving soon. 100% Telugu streaming platform aha has unveiled the trailer of its most anticipated sci-fi crime-thriller series Kudi Yedamaithe, starring Amala Paul and Rahul Vijay in the lead roles, this Wednesday. Directed by Pawan Kumar, the show spanning eight episodes will premiere on aha this July 16. Kudi Yedamaithe is a rollercoaster ride of emotions, suspense and thrills, revolving around the lives of a cop Durga and a delivery boy, aspirant actor Aadhi. The trailer was launched amidst the presence of media and the cast and crew of Kudi Yedamaithe in Hyderabad.
The gripping trailer keeps us hooked to the screens from the word go. Durga and Aadhi are confused about experiencing the same day (i.e. February 29, 2020) time and again. Durga is desperate to unearth clues in a case where a young boy is kidnapped, while Aadhi, earning his bread and butter through food deliveries, is keen to pursue a career in acting. The destinies of Durga and Aadhi clash during a road mishap, where they need to be together to solve a common problem that threatens to derail their existence. Will they ever get to witness a new tomorrow?
Kudi Yedamaithe is the first Indian web series to blend the time-loop element with a crime-thriller dimension and features absorbing performances by Amala Paul, Rahul Vijay, Ravi Prakash, Padmini Settam, Raj Madiraju, Eshwar Rachiraju, Pradeep Rudra and Surya Sreenivas. This is director Pawan Kumar’s third tryst with a thriller after Lucia and U Turn, and his terrific understanding of the nuances specific to the genre, promises to make Kudi Yedamaithe a nail-biting experience for the viewer. Some of aha’s high-profile releases in 2021 include Krack, Zombie Reddy, Naandhi, Chaavu Kaburu Challaga, Sulthan, 11th Hour, Ardha Shatabdham, Kala, Luca, Shylock, and In the Name of God. Stay tuned to the one-stop destination for the best Telugu entertainment.