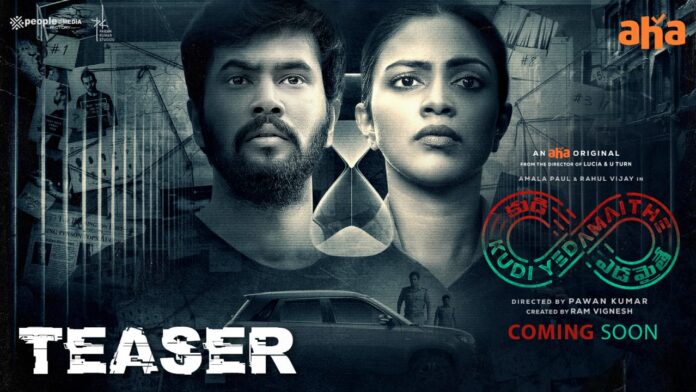 Week after week, 100% Telugu platform aha has been coming up with the latest blockbusters, quality web shows and originals to keep viewers glued to their small screens. July, on aha, has commenced with a bang, thanks to the Telugu premiere of Dhruva Sarja, Rashmika Mandanna’s action entertainer Pogaru and television host-turned-lead actor Pradeep Machiraju’s reincarnation saga 30 Rojullo Preminchadam Ela.
The month has more surprises in store for the viewer, especially with the release of the much-awaited sci-fi crime thriller Kudi Yedamaithe on July 16. The show, directed by U-Turn, Lucia-fame filmmaker Pawan Kumar, features Amala Paul, Rahul Vijay, Padmini Settam, Raj Madiraju in key roles. The teaser of Kudi Yedamaithe, which was launched earlier today, makes your wait feel even longer. Hinting at a thriller with elements of time-loop, crime and absorbing drama, the teaser offers a glimpse into the lives of its protagonist, a no non-sense cop Durga (Amala Paul) and a delivery boy Aadhi (Rahul Vijay) who’re baffled to experience the same day time and again. How would this time loop even end? July 16, is the day that viewers would be waiting with bated breath.
Earlier this week, the platform that is home to the best content in the Telugu digital space, kickstarted a new ‘Superhits’ campaign to usher in more joy in the lives of streaming enthusiasts. aha Superhits is directed at viewers who seek to celebrate the aura of their favourite stars through the favourite films and web originals on the platform. From Karthi to Ravi Teja to Samantha, Tammannah, Allari Naresh and Fahad Faasil, aha showcases some of their career-best performances across shows and films like Sulthan, Krack, Naandhi, 11th Hour, Sam Jam and Trance. In what promises to be a feast for movie lovers in the coming months, aha will also stream widely anticipated films like Sekhar Kammula’s Love Story (starring Naga Chaitanya, Sai Pallavi), the romantic comedy Most Eligible Bachelor (starring Akhil Akkineni, Pooja Hegde), Naga Shaurya’s sports drama Lakshya as well.
Some of aha’s high-profile releases in 2021 include Krack, Zombie Reddy, Naandhi, Chaavu Kaburu Challaga, Sulthan, 11th Hour, Ardha Shatabdham, Kala, Luca, Shylock, and In the Name of God. Stay tuned to the one-stop destination for the best Telugu entertainment.