Having made a decent debut with ‘Rangu’ director Karthikeya .V is next arriving with ‘Krishna Lanka.’ This film stars Paruchuri Ravi, Naresh Medi, Aadarsh, Krishna, Peddhi Raaju, Pratiksha and Anita Bhat in the lead roles.

‘Krishna Lanka’ is being jointly produced by Puna Sohla and Chetan Maisuriya under Sohla Productions Pvt Ltd and Chetan Raj Films banners respectively. Tuesday marks the birthday of producer Puna Sohla and so the ‘Intro of Krishna Lanka’ video has been unveiled.
Unlike the teaser and trailer, this intro video showcases all the prime cast of the film. There are no dialogues in this video yet portrays many emotional moments. Writer Paruchuri Venkateswara Rao’s son Ravi is playing one of the leads and his role is going to be highlight.
Speaking on the occasion director Karthikeya .V said, “This is an emotional crime drama with emotions of love, friendship and revenge. Every character in this film has a significance and the screenplay will be realistic. Heroine’s role is emotionally driven and the entire plot revolves around her. Heroes Naresh Medi, Aadarsh, Krishna and Peddhi Raaju roles are aggressive but Paruchuri Ravi’s role has mass appeal and audience would connect very much with it. Krishna Saurabh Surampalli is the music composer of the film and there is a huge scope for background score.”

The director further added that writers duo Paruchuri Brothers are like mentors and godly figures to him. “Post narrating the script, the kind of encouragement I got is something I will cherish for life. Their dialogues are asset for the film and every character in ‘Krishna Lanka’ will display peak of emotions. Currently the post-production works are going on,” said director Karthikeya. 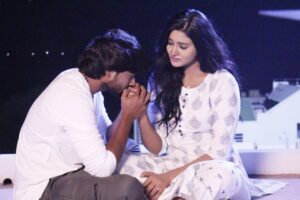 Producer Puna Sohla said,” Happy to enter the Telugu film industry with ‘Krishna Lanka.’ This film has met our expectations and I’m thoroughly satisfied that I have produced a content driven film. Along with Telugu, we are planning to release ‘Krishna Lanka’ in Hindi. Once normalcy is restored, we will decide the release and bring the movie to theatres.”
Producer Chetan added, “Happy to launch the ‘Intro of Krishna Lanka.’ We are hoping to get positive feedback from the audiences. The way director Karthikeya handled this film has really impressed us. The emotion in it will definitely attract the audiences. Post ‘Krishna Lanka’ I’m planning to produce more films in Telugu.”