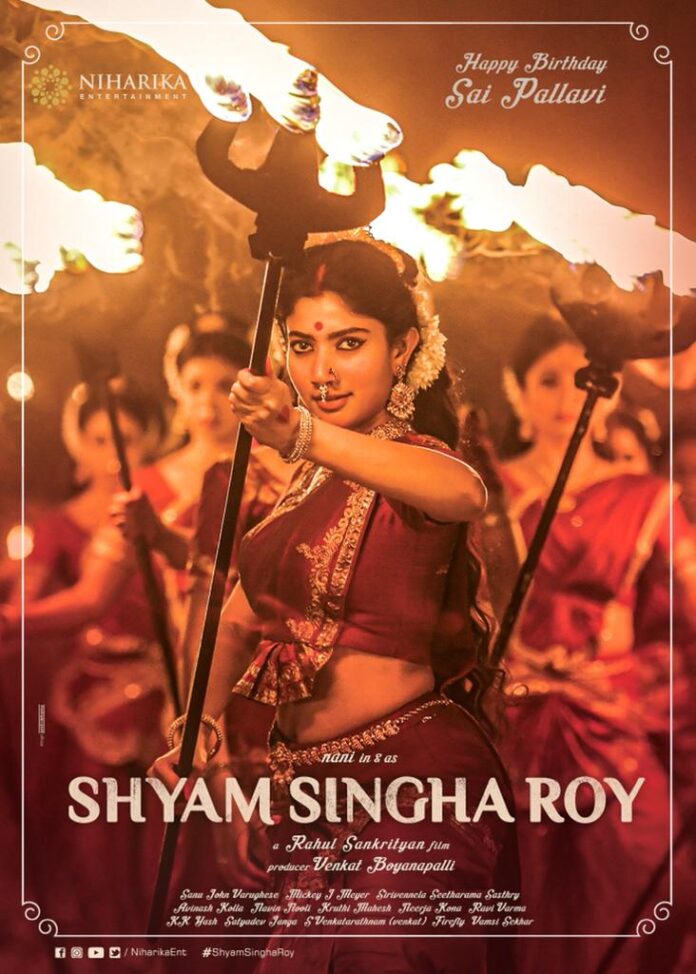 Set in the backdrop of Kolkata, natural star Nani’s Shyam Singha Roy is one of the most awaited films of the year. Made on lavish budget, the film indeed is an ambitious project for hero Nani, director Rahul Sankrityan and producer Venkat Boyanapalli.

Unfolding the gracious first look of Sai Pallavi from the film, the makers wished the actress on her birthday. Draped in traditional Bengali style saree, Sai Pallavi looks majestic here. The actress is seen holding a burning trident in the poster where we can also observe female dancers. This certainly is a perfect first look poster, we must say.

Shyam Singha Roy that will present every actor in a distinctive role will show Nani as a Bengali guy. First look poster of the actor that was released for his birthday got tremendous response.

Shyam Singha Roy has recently completed a crucial shooting schedule in Hyderabad in a massive Kolkata set in a 10-acre land in Hyderabad that was erected by art director Avinash Kolla.

Marks first collaboration of Nani and Rahul Sankrityan, Shyam Singha Roy is no less than a magnum opus, given the film is made with a unique concept and it is going to present Nani in a never seen before getup.

The Production No 1 of Niharika Entertainment has original story by Satyadev Janga. Melody songs specialist Mickey J Meyer scores music, while Sanu John Varghese cranks the camera and Naveen Nooli is the editor.