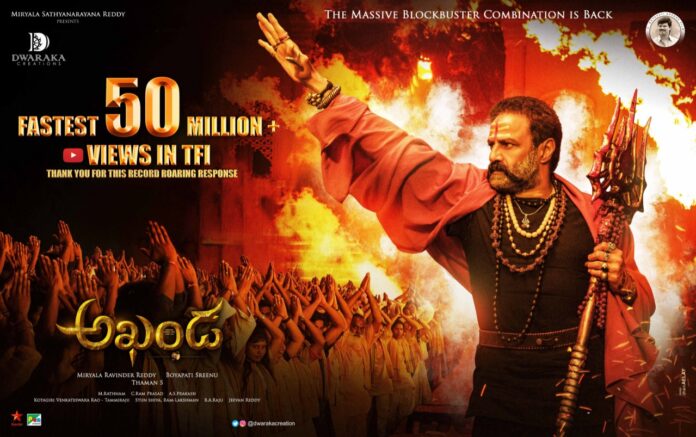 ‘Kaalu duvve Nandi mundu rangu maarchina pandi.. Kaarukuthalu kusthe kapaalam pagilipoddi’. This dialogue has been reverberated across the both Telugu states ever since the release of NBK – Boyapati Srinu’s ‘Akhanda’ Teaser titled ‘Title Roar’. This dialogue became very popular and doubled the expectations on the hat-trick film, ‘Akhanda’ in the massive blockbuster combination of NataSimha Nandamuri Balakrishna and Mass Director Boyapati Srinu after Blockbusters ‘Simha’ and ‘Legend’. Makers unveiled the teaser of ‘Akhanda’ as a Massive Title Roar on the auspicious day of Ugadi. The ‘Title Roar’ of ‘Akhanda’ got thumping response and cruising ahead with mighty response. The ‘Title Roar’ has garnered 50+ million views within 16 days and created a new record of the fastest 50+ million in Tollywood. The team thanks the Fans and audience for the massive success of ‘Akhanda’ title roar. On this occasion…

Director Boyapati Srinu said, ” After ‘Simha’ and ‘Legend’ the audience have high expectations on ‘Akhanda’. We made this film matching their high expectations. You will once again witness nataviswaroopam of Balayya in this film. I heartfully thank the audience and fans for making ‘Akhanda’ title roar a humongous success and made it fastest 50+ million views in such a short time. I wish everyone should wear a mask and follow all precautions during this Corona Crisis period. I request everyone to take vaccine as early as possible.”

Producer Miryala Ravinder Reddy said, ” Ever since the ‘First Roar’ of our film ‘Akhanda’ is released, the film is carrying very good expectations. Now with the powerful Title Roar of ‘Akhanda’, the expectations were raised to next level among the audience and fans. Boyapati Garu is handling this film superbly matching everyone’s expectations. I hope ‘Akhanda’ title roar will create many more records surpassing 50+ million views. ‘Akhanda’ will be a prestigious film in our Dwaraka Creations banner. Hat-trick movie, ‘Akhanda’ in Balayya Babu and Boyapati Garla combination will be like a feast for Nandamuri fans. We will meet and celebrate in Theatres after we overcome the current crisis of Corona.”

This Natasimha Nandamuri Balakrishna starrer will have Pragya Jaiswal, Jagapathi Babu, Srikanth and a huge cast. ‘Akhanda’ is being Prestigiously made in Dwaraka Creations banner Produced by Young Producer Miryala Ravinder Reddy under the presentation of Miryala Satyanarayana Reddy.