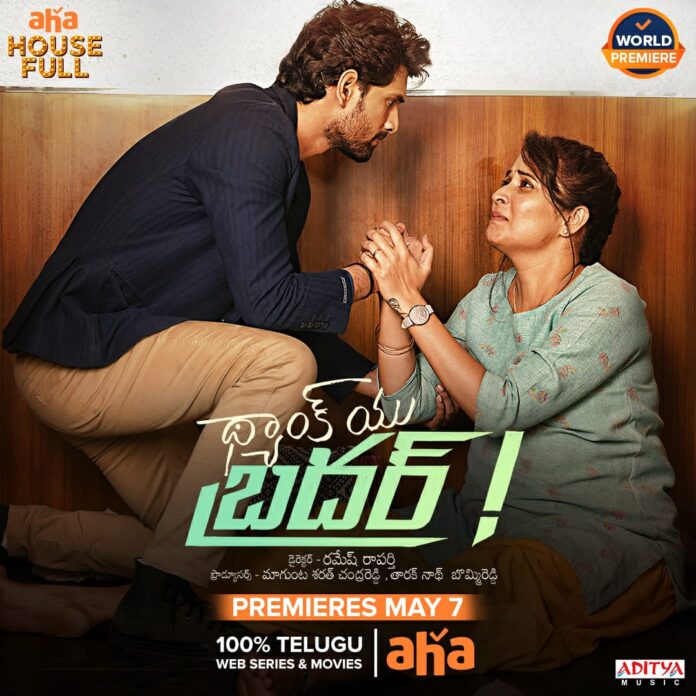 The World Digital Premiere on aha was announced via a virtual press meet.
100% Telugu platform aha is leaving no stone unturned to provide ‘housefull’ entertainment at the convenience of your homes with an enthralling lineup of blockbuster films, originals and web shows this summer. After a rollicking start to 2021 with Krack, Gaali Sampath, Naandhi, 11th Hour, Mail, Thellavarithe Guruvaram and Chaavu Kaburu Challaga, an intriguing thriller, Thank You Brother, is set to have a direct OTT premiere across the globe on aha on May 7.
Thank You Brother, featuring Viraj Ashwin and Anasuya in the lead roles, has been directed by Ramesh Raparthi. The thriller, produced by Magunta Sarath Chandra Reddy revolves around a hot-blooded youngster and a pregnant woman stuck in a non-functional lift. Though the film was slated to release in theatres later this month, the makers have opted for a direct digital release on aha, keeping in view the unprecedented situation caused by the second wave of the COVID-19 pandemic.
aha, with its uncompromising zest to deliver quality Telugu entertainment at the fingertips of audiences, is confident that the film’s gripping treatment of a novel plot would get its due with the direct digital premiere. The trailer of Thank You Brother, unveiled by actor Venkatesh Daggubati, has already got several film-lovers curious, also earning plaudits from the likes of Rana Daggubati, Naga Chaitanya, Prabhas and Mahesh Babu. Thank You Brother is filled with several twists and turns and is complemented by the right blend of emotions and drama.
Starring: Anasuya Bharadwaj, Viraj Ashwin, Monica Reddy, Harsha Chemudu, Archana Ananth, Aadarsh Balakrishna
Screenplay & Direction : Ramesh Raparthi
Producers: Magunta Sarath Chandra Reddy, Tharaknath Bommi Reddy
D.O.P: Suresh Ragutu
Music: Guna Balasubramanian
Art: Purushotham Prem