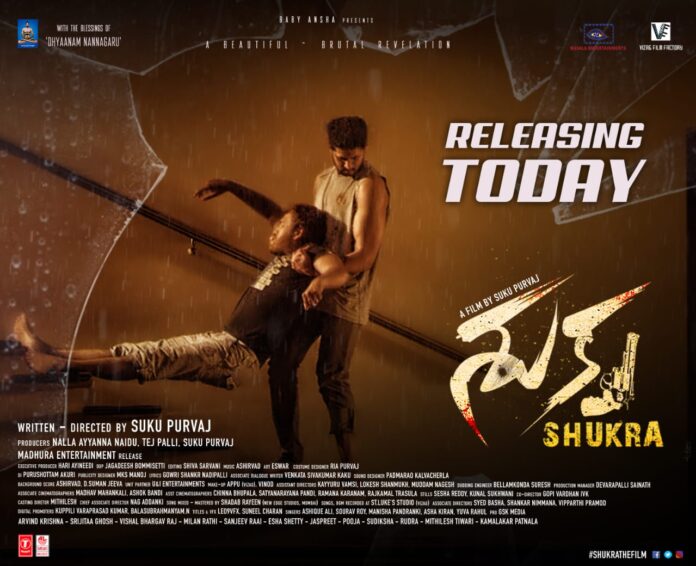 Shukra is a crime thriller with Jaw dropping twists and turns in second half. Aravind Krishna and Srijeeta Gosh played the main lead roles. The film is directed by Sukku Purvaj under Rujala Entertainments and Vizag Film Factory together bankrolled it. The film is released on 23rd April, 2021. Check the review below…

The film begins with a mass killing and Robbery. Thugs mafia gang will target rich families who lives in city outskirts. Willy (Aravind Krishna) and his wife lives a happy life. They enjoy their life with parties and Alcohol. One weekend, a huge get together party will be held with friends and families in Willy’s House. After a lusty party, Willy finds his wife and two other friends dead in his house. Parallelly, Thugs Gang will be after Willy’s Life. Why Thugs gangs will torture Willy and what happens that night is rest of the story.

After a long Gap, Aravind Krishna came up with a crime thriller with lots of Alcohol and Lust. His performance is outstanding. Srijeetha Gosh is gorgeous and mass audiences will love her for her Oomph looks. All girls are sexy in this film and youth audience will love them watching on silver screen. Others actors did as required.

The film looks very stylish and cinematography is just brilliant. The editing is very stylish and gripping. The background score and Songs are very trendy. Production values are high. Story is very regular and simple but screenplay is gripping and very stylish. More or less its ultra modern stylish crime thriller.

Shukra is realistic ultra modern crime thriller with beautiful girls and edge of the seat screenplay. Youth will love this film to the core. Go and watch it.

Black Movie Theatrical Trailer is Out

Black Movie Theatrical Trailer is Out

O My Love teaser is Out