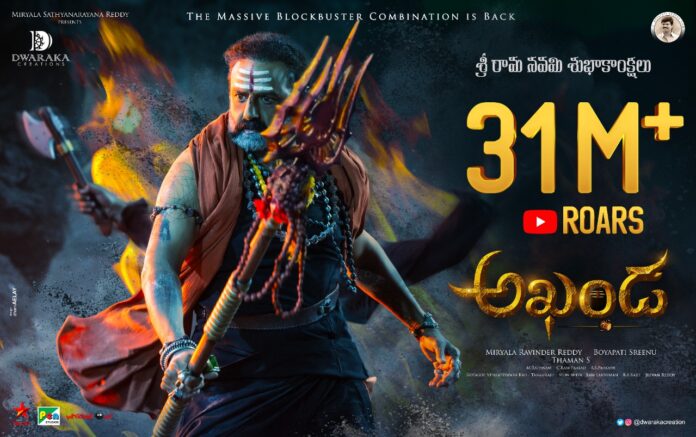 After Biggest Blockbusters ‘Simha’ and ‘Legend’, NataSimha Nandamuri Balakrishna and Mass Director Boyapati Srinu’s massive blockbuster combination collaborated again for ‘Akhanda’ to deliver a hat-trick blockbuster. ‘Akhanda’ is Presented by Miryala Satyanarayana Reddy and Prestigiously Produced by Young Producer Miryala Ravinder Reddy under his Dwaraka Creations banner. Makers unveiled the title as Powerful ‘Akhanda’ along with teaser as a Massive Title Roar on the auspicious day of Ugadi. The teaser of ‘Akhanda’ got thumping response and cruising ahead with mighty response. The teaser has garnered 31 million views already. The sensational teaser of ‘Akhanda’ has multiplied the buzz and expectations on the film. The film will almost complete it’s shoot with ongoing nonstop schedule which will continue till April 30.

This Natasimha Nandamuri Balakrishna starrer will have Pragya Jaiswal and Srikanth along with a huge cast.